Every quarter, the U.S. Federal Reserve releases its report regarding the Financial Accounts of the United States. Although this is a very lengthy and detailed analysis, it does contain some interesting statistics on housing. The particular “nuggets” that I look for relate to the total value of residential real estate, mortgage debt and, rather importantly, details regarding homeowner equity.

The chart below shows all of these datasets going back to 2000, and the results are rather fascinating. In regards to total real estate values, you can clearly see the pre-bubble run-up and subsequent burst that followed. From its peak figure of $22.5 trillion at the end of 2006, home values lost an enormous $6.4 trillion in value by mid-2011. 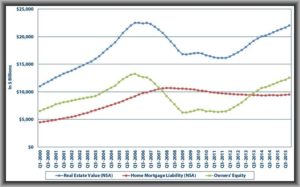 However, what is even more interesting is that by the end of 2015, home values had regained almost all of the value they lost in previous years, and now stand at $22.03 trillion.

A price recovery is clearly in place.

But this is not the end of the story. As much as I like to see housing values grow, if this growth is simply led by leverage (borrowing), then it is a house of cards. However, I am happy to report that this is definitely not the case here.

While home values have grown quite quickly over the past four years, we have added very little to our debt load. As the chart above shows, mortgages peaked in 2008 at around $10.7 trillion, but have since tapered to $9.49 trillion, and remain well below their historic peak.

So what does all this mean?

It means that with home prices rising and consumers not taking on additional mortgage debt, equity levels have grown substantially. The country went through a very painful period of negative equity during the housing recession, but the growth started returning in 2012, and we moved back into a period of positive equity again by the summer of 2013. In 2015, equity levels increased by an impressive 10.2 percent to $1.17 trillion. Total owner equity now stands at $12.54 trillion and is closing in on the all-time high seen in 2006.

With the appreciable gain in home owner equity levels, we have seen a rapid drop in the number of “underwater” homes, as well as an increase in so-called “equity-rich” homes (those with a loan to value ratio of less than 50 percent).

Core Logic suggests that the percentage of underwater homes has dropped to 8.5 percent at the end of 2015 – down from 25.9% in early 2010 – and according to RealtyTrac, the percentage of “equity-rich” homes has now risen to 22.5 percent. This data should ease people’s concerns regarding the formation of a housing bubble – at least a national one. Growing equity levels will certainly act as a cushion against unforeseeable drops in home values.

If this data does show one potential issue, it is that we will likely start to see more “move-up buyers” enter the housing market as they tap into regained equity and look to upsize. On the down side, this could put more buyers into an already crowded marketplace, but it may also result in a new supply of homes for sale – something that is much-needed in markets all across the U.S.